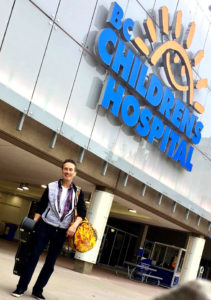 One day a week since the mid 1990s, Lyle Povah has been sharing drumming, rhythm and music with kids at British Columbia’s Children’s Hospital in Vancouver, BC Canada. The intention is to have fun, to normalize the hospital experience, to share the joy of music and rhythm, to distract from painful medical procedures, and to foster health through movement, breath, participation, connection and laughter.

“I have been fortunate to observe Lyle with patients and families for over 20 years and have seen the effects his skills have on people coping in the hospital environment. Recently, Lyle began playing music with a young, timid child in the hallway on one of the wards. Gradually, a few other children of varying ages and their families appeared from their rooms. Lyle seemed to effortlessly engage each individual person to the group in a way that was spontaneous, natural and comfortable. One shy baby began reaching for shakers, another bounced her feet to the music. An apprehensive teenager and her family seemed to shed a layer of stress while waiting to be called for transplant surgery. Staff smiled as they passed in the hall. The powerful moment was when the group and staff spontaneously joined hands to form an arch, to Lyle’s music, when it was time for the teen to go to the operating room. Everyone’s day was transformed by Lyle’s wonderful ability to soothe and connect people through music.” Rita Marchildon, Child Life Specialist, BC Children’s Hospital “Lyle’s intuition is so attuned that his performance engages all ages and cultures. Often this is the first flicker of response and hope that the families (and the docs) see. The heart rates, blood pressure readings and breathing patterns settle in a response far greater than that to any medication that we have to offer. Smiles, sometimes tears cross the faces of the nurses as the whole team takes a break from the stresses of the ward to enjoy the Lyle moments – rewarding human moments in a sea of high-tech critical medicine.” *** Dr. Sal Denny, MD, FRCPC – Pediatrician, ICU Step-Down ward, BC Children’s Hospital

A thank you note to the Women’s Auxiliary of Children’s Hospital, who provide funding support for the Music Program. “This anecdote is about a sweet moment in time, a moment somehow enlarged due to it being remembered many times over, first by a young girl’s Mother, then by being passed on to me, and now to be remembered by you. I played a part in this moment (but wouldn’t find out about it until months later) and so did all of you in the Auxiliary. Baby Mary was born in June 2006, spent about two months in the special care nursery, a month and a half in the ICU, then on to the TCU. Fast forward to the day when staff put on a going home party for Mary and Mom Alison. As Mary and Alison were waving their final good-byes, I happened to be focused on music with another child and was singing the “Green Day” song “….I hope you have the ‘Time of Your Life’….”, unaware of the emotional farewells behind me. Alison describes this moment, if it had been captured on film…heading out the door, waving goodbye to staff as the song played…as a most perfect commercial for Children’s Hospital. It was a happy and emotional time. Months later, Mary was in at Children’s Hospital and it was then that Alison relayed the story to me. When considering a way to express thanks to all of you in the Auxiliary, it occurred to me that just as I was unaware of the effect of the song I chose to play in “Alison and Mary’s moment”, you are perhaps also largely unaware that your contributions of time and energy to fund my work makes a huge difference in creating these special moments at the hospital. I am very grateful for the incredible gift it is to work with children, families and staff at B.C.’s Children’s Hospital. Many thanks to all of you.” ~~~~~~~~~~~~ “I was asked to see a shy three year old girl in the hospital playroom with her mother. I started playing music, not looking at her directly and allowing her to show interest in her own time. She continued to play with her pop-up toy. The next time the toy popped up I stopped the music – she was visibly surprised (I would feign surprise as well) – the ice was now broken and the game was on! Soon she was smiling every time and clearly understood that she had complete control in stopping the music. When she would arm the pop-up toy for next time, I’d start the music again. I could see the anticipation building in her little body, awaiting the next surprising moment when all would stop on her cue. It was very heartwarming to witness the change in body language and demeanor as she began to play and have fun on her own terms. Musical moments such as this signal the beginnings of connection and trust, and assist in re-framing hospital visits as, at least in part, joyful and fun.” ~~~~~~~~~~~~ My name is Melissa and I was in BC Children’s Hospital when I was 6 until I was 9 (1996-99) battling kidney cancer. I’m now almost 20 and for the last 2 years – every night – I have listened to the lullaby side of your album (“Just Kidding, After All These Years”) with my son, most days we dance around the living room to the other side. To this day one of my favourite songs is the vacuum cleaner hoses one. I remember you coming into the hospital to sing songs with us kids, those days are some of my best memories from being in the hospital. Your music continues to hold some of my most cherished memories with my son and I have recently purchased a new tape from BCCH to give to my son one day to listen with kids of his own. I just put my son to bed about an hour ago and after singing a couple songs with him I thought it would be a great idea to email you. I hope everything is going well for you and I’m very happy to be alive today to share your music with my son and create great memories.